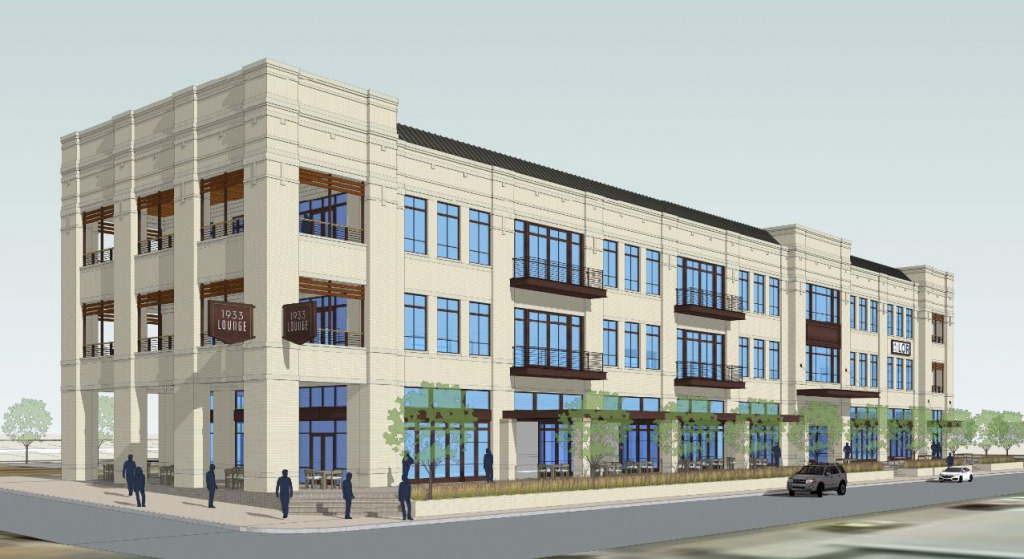 A 43,000-square-foot building would include a 1933 Lounge at South Rangeline Road and 1st Avenue Southeast in Carmel. (Rendering provided by Carmel Redevelopment Commission)

Indianapolis-based developer LOR Corp. and the Carmel Redevelopment Commission are planning the project on two acres across from the Indiana Design Center at the intersection of South Rangeline Road and 1st Avenue Southeast.

The project at 111 S. Rangeline Road would include a 43,000-square-foot, three-story mixed-use building on the western portion that would feature  1933 Lounge on the first floor, according to media release from the city on Friday.

The top two floors of the building would house office and mixed-use space. The development would also include 12 three-story, for-sale townhomes with rooftop patios on the eastern portion of the site.

LOR would be the developer of the project. 1933 Lounge would be a tenant.

Huse Culinary CEO Craig Huse said in the release that expanding to Carmel has been a priority for the company for two years.

“[1933 Lounge is] a destination, especially for people in central Indiana,” Mestetsky told IBJ. “Huse knows what they’re doing. They’re amongst the very best, and it’s nice to have them in our core.”

The new development will include demolishing existing structures on the largely vacant land, including the home of Favorite Finds antique store at 111 S. Rangeline Road and two for-rent residential houses.

Huse opened the first 1933 Lounge on the second floor above St. Elmo Steak House at 127 S. Illinois St. A second location opened in 2019 in Fishers District.