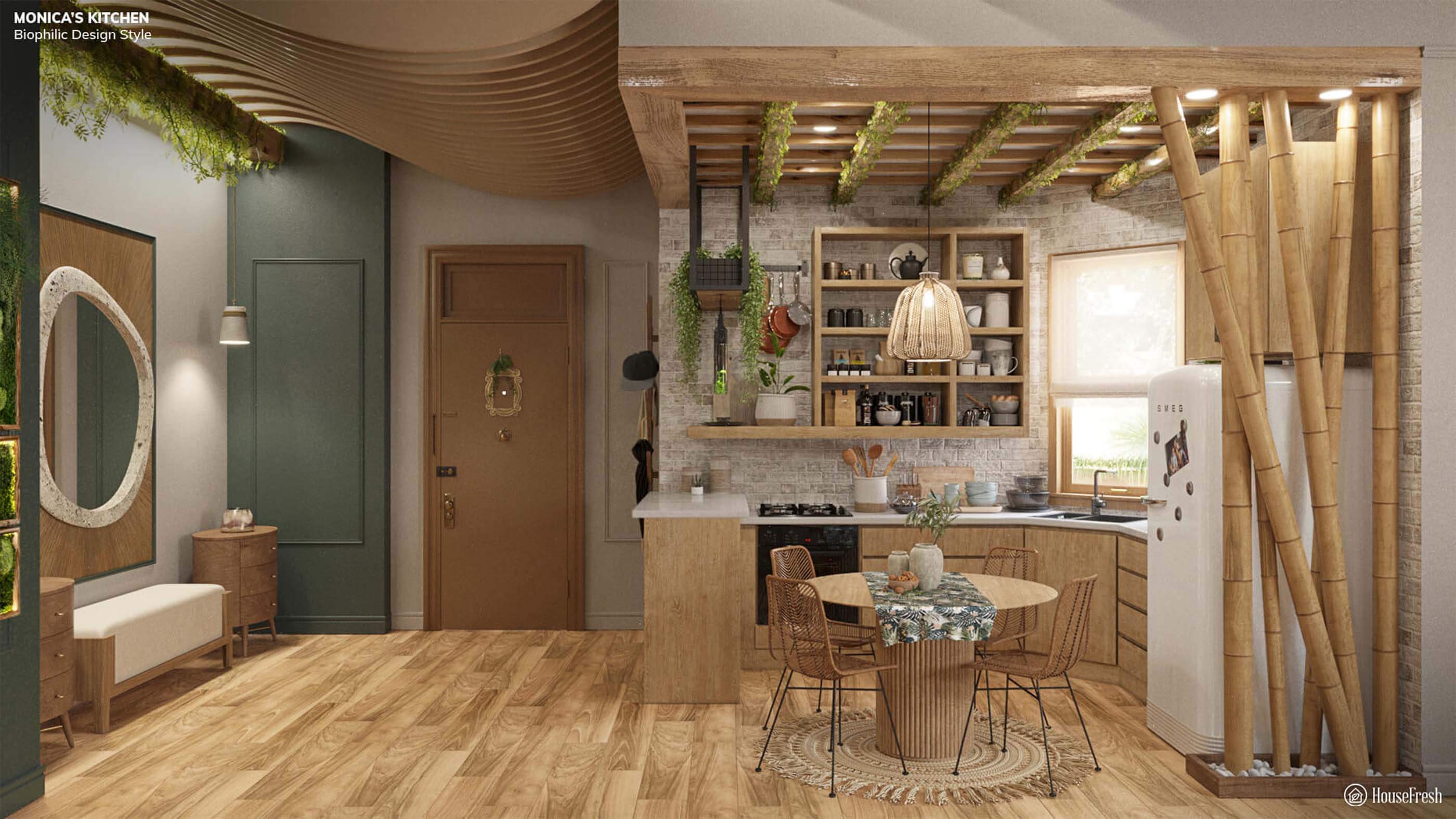 Imagine Monica Geller’s apartment in Friends without the purple front door, the teal blue cabinets, mismatched dining chairs, and other 1990s era decor. HouseFresh, a team of specialists providing tips for keeping your home “clean and fresh,” has realized the sitcom-famous apartment using elements of biophilic design, including greenery and natural materials, such as wood. The renderings and 3D walkthrough capture nearly every detail of the living space—the notorious yellow frame included—toning down the abundant use of color and patterning with neutral shades.

The creative endeavor offers a “practical exploration” on how to decorate interior spaces using elements of biophilic design. In choosing the fictitious Friends apartment—Apt. 20 at 90 Bedford Street—HouseFresh conveys biophilic concepts in a widely known and recognizable space.

Biophilia is a human’s instinctive tendency to engage with nature. Biophilic design integrates nature and human biology into the built environment, improving human health—reducing stress, boosting creativity and focus, and facilitating healing. Guiding principles of the design include furnishing the space with biomorphic pieces, achieving balance and contrast among objects in color, size, and scale, creating refuge spaces, and controlling the climate—paying mind to natural ventilation and light.

“The HouseFresh team redesigned Monica’s iconic apartment using biophilic design principles-using materials, grains, textures and elements in design that distinctly reflect the natural environment to create an overarching sense of the natural world,” the designers behind the project said in a press statement. “After compiling a list of common biophilic design elements, like using large natural wood beams and incorporating plants into the design ,the design team applied these design principles to each room in Monica’s apartment to create a series of renders to showcase how it would look.”

A defining principle of biophilic design is visual connections with nature, capturing this element is a challenge in a New York City apartment that is pressed for space and surrounded by views of homogenous brick buildings. Placing potted plants and hanging green walls is a simple way novice interior designers can try their hand at bringing nature to the indoors.

In HouseFresh’s visualizations of the Friends apartment, the infamous hallway straddling the space between Monica’s door and Chandler and Joey’s apartment is faced with a plant wall; similarly, greenery drapes from the ceiling beams in the open living room-kitchen space and furnishes the porch.

As for the furnishings in the pseudo-West Village residence, the wood nightstands and end tables are swapped out for actual tree stumps and lamp stands are reminiscent of branches. The white sofa at the center of the living room takes on a new form resembling the undefined shape of a living organism. Gone are the multicolored walls, now replaced with a mix of wood materials, including rattan and bamboo.

This isn’t the first time a design team has reimagined the Geller et.al apartment; other iterations of the fictional two-bedroom, one bath domicile include a Victorian overhaul and a redesign by celebrity designer Bobby Berk.

What if Central Perk was reimagined next?