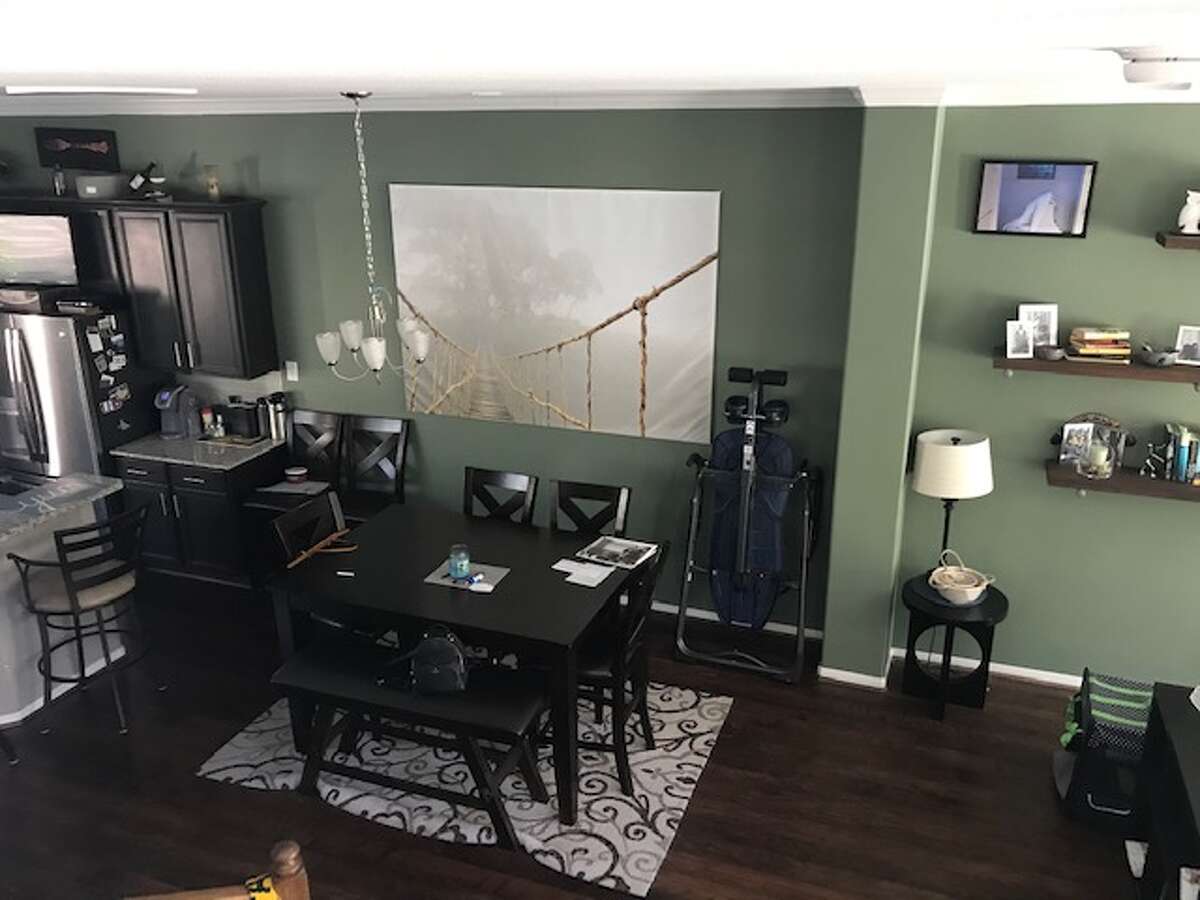 Houston HGTV junkie gets her dream house with designer help

Crystal Gates and Copatriccq Dartis were fairly happy with their Oak Forest home when the coronavirus pandemic set in. Their workdays took them to an office and it felt like they were only home a couple of hours in the morning and evening, plus weekends.
Suddenly, like the rest of America, they were at home all day and night and they took a good look around.

“When we lived in Denver, we fixed up (our house) to sell it before we moved (to Houston), and when it was done, it was beautiful. I wish we had lived in the house when it looked like that,” said Gates, 49 and a tax partner at a Houston accounting firm. Dartis, 50, is an insurance adjuster.

Lesson learned. So Gates and Dartis set out to make the 2,200-square-foot home they’ve owned since 2014 one they love – instead of one they simply live in.

MORE HOME DESIGN: A formerly ‘drab’ Katy house gets a total makeover with a splash of color, patterns and accessories

Their neighborhood is filled with homes built around the same year — small, two-story houses with small front yards and side patios so that the exterior maintenance is minimal. They had a handful of floor plans to choose from and changes weren’t really allowed. When they bought the home, Gates’ two children – a son who’s now 30 and a daughter who’s now 26 – lived with them. Now, they share the home with their two beloved rat terriers, Chloe and Moxie.

Gates chose her own tile, flooring and paint colors, feeling like she’d made good choices. But all of those things she loved individually didn’t work well as a whole.

A self-described “HGTV junkie,” Gates spends time watching “Property Brothers,” “Forever Home,” “Love it or List It” and other home makeover shows. Many who watch those shows end up with unrealistic expectations about how long projects take, as well as how much they cost.

Gates’ take-away, though, was that she knew she needed help. She could paint a room or pick things out, but, she said, they’d look like the work of an accountant, not an interior designer. That’s when she found interior designer Stephanie Vaughan of Design Dwell Interiors, who guided her through choices and offered ideas Gates knew she wouldn’t have thought of.

“I use (the kitchen) more. I enjoy cooking and look for things to make. And I can sit there and look at that tile all day,” Gates said. “It’s also nice when we have company; it feels more welcoming to guests. It’s the house I’ve always wanted.”

They started design planning in the spring of 2020, with construction getting under way in late October and finishing by New Year’s. Gates and Vaughan both acknowledge that schedule wouldn’t be workable today with supply chain issues, so their pre-shortage timing was perfect.

When Gates and Dartis decided to remodel, they were primarily thinking of the kitchen, though the work spread to include the dining area, living room, stairs and powder bathroom.

That main living area was dark, as Gates had painted the walls dark green and a deep plumb. The engineered wood floors were dark with red undertones and the cabinets were stained dark brown.

The kitchen got a complete makeover, reinventing the floor plan by moving appliances and changing the island from a C-shape to an extended rectangle that gives them three more feet of counter space both on the island and on the wall of perimeter cabinets. New cabinets extend to the ceiling with a top row of glass-front display cabinets and a dedicated place for a TV above the refrigerator. Before, the TV sat on top of the fridge, perched on a stack of books that put it at the right height.

When it came to the color palette, Gates knew one thing: her favorite color, purple, had to be used.

In the kitchen, a new, 48-inch Hestan range with five burners, a griddle and a double oven give Gates plenty of room for cooking. The brand – which started as cookware then shifted to outdoor grills and home kitchens – is both beautiful and functional and could be called the jewelry of the kitchen were it not for the eye-catching backsplash tile Vaughan and Gates found.

Turkish marble called “Milas Lilac” was installed from the counter to the ceiling in a random pattern that initially made Gates nervous. She loved the tile – white with gray veins and patches of purple ranging from muted shades of lilac to plum – but the accountant in her couldn’t quite embrace the random pattern.

This is a carousel. Use Next and Previous buttons to navigate

Gates trusted Vaughan and now she’s glad she did. When she sits at the island or spends time in the kitchen, she loves looking at the beautiful tile.

This end of the home also has considerably more natural light, since sliding door and window panels were installed where there once was a solid wall. Instead of looking at sheetrock, they look out to their patio.

Next to the kitchen is their dining area, smaller now since some of the square footage was used to enlarge the kitchen. It’s just Gates and Dartis at home, so a smaller table works just fine. Their small, glass-topped table has a pair of upholstered chairs and a beautiful, two-ring chandelier dangling from the ceiling.

Vaughan designed an accent wall of wallpaper and fretwork in a pretty shade of purple, Sherwin-Williams’ “Exclusive Plum.” The wallpaper has a slight pattern/texture to it, and each section is laid with the same angle as the fretwork.

Where there once was a pillar that served no purpose other than to hold ductwork, Vaughan created a bigger, bumped-out section and installed an electric fireplace. The stacked quartz fireplace surround now also covers the space with the ductwork, so you don’t even notice that it’s there.

And Gates and Dartis get a new cozy spot with a pair of swivel chairs – yes, with purple decorative pillows – and can relax in front of their fireplace that displays faux flames and no heat. After all, in Houston’s warm climate, how often do we really need a burning fireplace?

On the opposite wall is a circular staircase that the couple didn’t initially intend to remodel. During the planning, though, pipes in the wall leaked and they woke up one day to find water in their home and the staircase in need of changes. Insurance covered those repairs, so the couple worked a remake into the project.

Their engineered wood flooring was replaced with softer luxury vinyl tile that looks like wood, and it now runs throughout the first floor, up the stairs and on part of the second floor. On the stairs they also brought in iron balusters to replace the original painted white wood ones and removed glass block windows to install traditional windows with pretty seagrass window shades.

The living room, part of this open space, was in the front of the house with three windows and had a simple arrangement with a sofa, settee, some tables and a TV.

Vaughan created a wall of contemporary shelving, with space for books, photos and mementos and a TV that plugs into the wall. Drawers at the bottom hold things that can be tucked away, and there’s an empty spot for the dogs’ bed.

A pair of windows on the front wall are a different size than the window on a side wall, so Vaughan used new window treatments to create symmetry. Window blinds and draperies now hang from the same height on both walls, regardless of where the window starts, and you have to look closely to see the difference.

The color scheme here is mostly neutral, with pops of purple in the accessories on the shelves and pillows scattered on the sectional sofa. There’s even a grouping of books, all stripped of their paper jackets to show off their purple bindings.