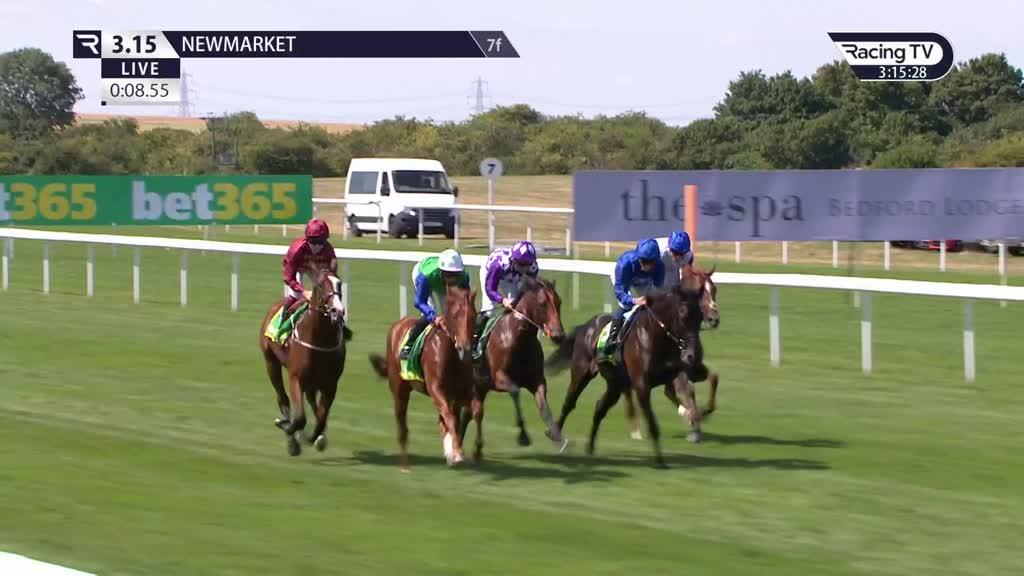 The famous emerald green and royal blue silks of the late Robert Sangster, carried to so many big-race wins over the years, were back in the big time at Newmarket on Saturday when Isaac Shelby (3-1) maintained his unbeaten record with victory in the Group Two bet365 Superlative Stakes (7f) – leading trainer Brian Meehan to nominate next year’s QIPCO 2000 Guineas as a long-time target.

Successful on debut at Newbury 39 days ago the Night Of Thunder colt, who runs under the Manton Thoroughbreds banner of Sangster’s family, raced handily throughout. Taking a narrow advantage entering the final furlong, Isaac Shelby kept finding more and held off the sustained challenge of Godolphin’s Victory Dance (5-4 Favourite) to take the honours by a head. The victory brought up a 39-1 double for jockey Sean Levey following his success on Alseyoob (9-1) in the opener.

Winning trainer Brian Meehan said: “He’s very nice. You’re always tempted to make predictions but he really is the business I think, he looks really special and could even be a Guineas horse. He’s got a good temperament and Sean knows him well so they’re a good package.

“We’d stay at seven now which I think is ideal but we won’t be in any hurry. I think we’d train him as a Guineas horse now. These horses are special and they’re the reason you do it. You get the most enjoyment out of training winners of course, but when you get horses like him with serious potential it’s exciting.

“All winter he’s looked like a nice horse. He’s straightforward with a lovely temperament and is very easy to deal with. We’ve got a great team at home with some very good judges and they’ve always like him. It’s easy to think that he was going to be nice, but this is high-end stuff and he’s really proven himself.

“We’ll take it step by step and won’t rush into things, but he’s a horse that we think is going to improve and physically there’s still massive improvement there in him. We’ll bide our time and won’t rush into any sort of plan, we’ll see how he is and then form a plan.

“I’m so pleased for Sam (Sangster), we do a lot together. He buys horses for me and my clients as a bloodstock agent and he runs these partnerships as well. It keeps the colours alive which is really cool, he’s a great guy and I can’t thank him enough for his support.

“I don’t know if we’ll run again (before the Darley Dewhurst Stakes on the Rowley Mile in October), we’ll get him back and sit round the table and make a little plan after a week or so. Goodwood would come too soon, but the Champagne Stakes (at Doncaster in September) is a race I’ve thought about. I love the Breeders’ Cup so the Juvenile Turf is one we’ll definitely factor into our thoughts as well.”

Charlie Appleby, trainer of the second Victory Dance, said: “The winner is a nice horse as he won that maiden at Newbury nicely. I feel we have more to go forward with as well. We saw him there on his first start only just getting the hang of it and I thought when he got into a battle he did well for his inexperience.

“I think going forward we have got all the options now. I won’t take him to somewhere like the Vintage. If we seek significant improvement at home we will carry on with Plan A and head to the National Stakes.”

Richard Hannon, trainer of Dark Thirty (10-1), who was a further three and three-quarter lengths away in third, said: “It was a step up from his Chesham run and I’m very happy with it. The interference wasn’t ideal but the best horse has won. We are delighted with our fellow as he has got home very well. He will get further in time.

“He would have finished closer (without the interference) but I don’t think he would have finished a position closer. He is a very nice horse and a class horse to look forward to the rest of the year. We wouldn’t be far away in some of those seven-furlong Group Threes. There is the Prix Francois Boutin at Deauville which would be ideal. He is a very nice horse and that is a huge step up on his Ascot run. He is definitely not average.”

Tap the image now for your chance to win our epic Ebor package!