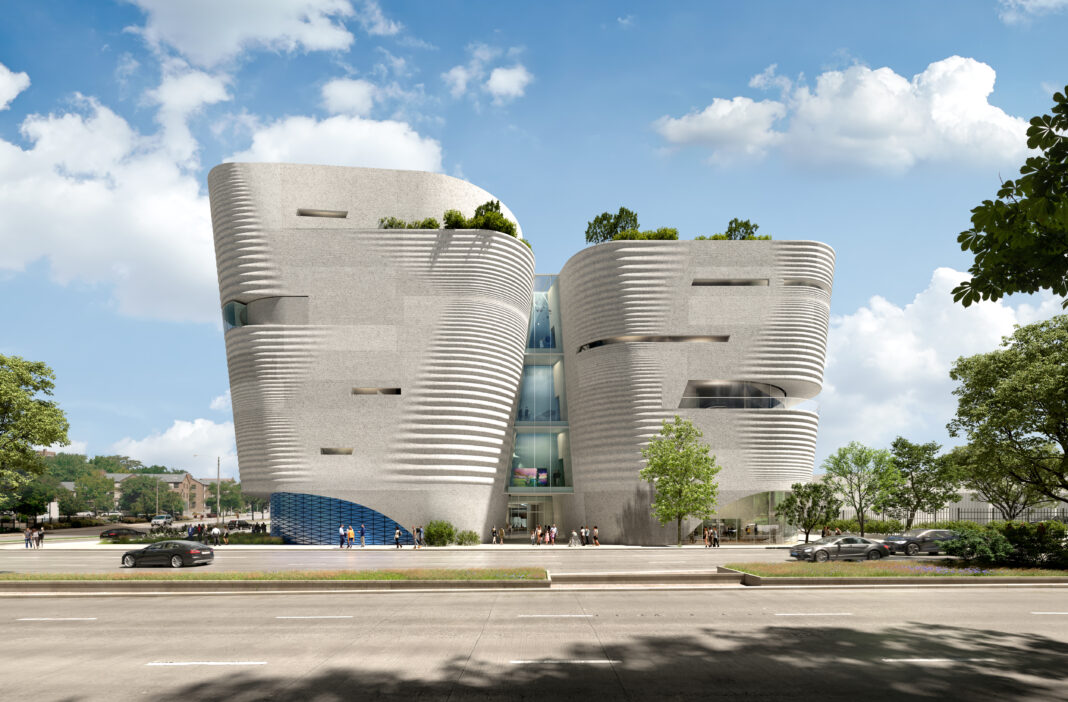 When people visit a new Milwaukee Public Museum in four years, they will enter a grounds and structure reminiscent of Wisconsin’s geological landscape – one formed by rocks and water, and the push of glaciers across the state millions of years ago.

On Monday morning, MPM unveiled renderings for its planned $240 million new museum building and campus slated to be built on a 2.4-acre site northeast of 6th Street and McKinley Avenue in the Haymarket neighborhood near downtown Milwaukee.

Designed by New York City-based Ennead Architects and Milwaukee architecture firm Kahler Slater, the 200,000-square-foot building is designed to be reminiscent of the ancient geological formations in Mill Bluff State Park near Tomah, and will appear on the outside as if it actually three separate wind-swept structures or “lobes.”

The convergence of Milwaukee’s three rivers — the Milwaukee, Kinnickinnic and Menomonee — inspired the design of the interior commons, with entrances welcoming visitors into a dynamic gathering space, the museum said.

The new museum will also include two gardens, designed by Seattle-based landscape architecture firm GGN, located near the entrance to the museum and on the rooftop, providing an opportunity to bring native plants back into Milwaukee’s urban environment.

“Our community has the privilege and opportunity to reimagine what this beloved institution can be and further our mission to inspire curiosity and knowledge of our world’s natural and cultural diversity,” Ellen Censky, MPM president and CEO, said of the design in a statement.

The five-story building itself is designed as an organic form, with rounded corners portraying the erosion and weathering that happens as landscapes evolve over time, MPM said.

“We have been doing focus groups with people for several years, and in the case of the building itself people have been very clear in wanting something iconic, something Milwaukee can be proud of that is distinct and unique. So, when you look at the building (design) it is really delivering on what people have been asking for,” Katie Sanders, MPM’s chief planning officer said, adding that a focus is being put on being innovative and serving the next generation of learners. “The current building doesn’t necessarily articulate the mission of the museum. It houses the museum.”

The three “lobes” of the building will house some of the museum’s 4 million objects and artifacts in re-imagined exhibits.

Just what those new exhibits will be, remains to be seen, but museum staff stated that the butterfly vivarium and Daniel M. Soref Dome Theater & Planetarium will be key features in the new building.

The first floor will house an open museum commons atrium where visitors can gather and bask in natural light from a sunlit lightwell, while the four upper levels will be devoted to exhibits.

The museum’s collections storage lobe will be offset from neighboring floors in the museum, allowing visitors to peek into and preview different exhibit floors and collections that are not part of specific exhibits or dioramas.

The new building will also have its own parking garage. Located in an attached structure, the 200-space garage is expected to give the MPM a revenue stream that it doesn’t currently have at its county-owned building.

“MacArthur Square, which is owned by the city, is where visitors currently park, and we don’t receive any revenue from that,” Sanders said. “We actually pay for our members to park there. Parking is typically a revenue stream for museums, so that is a really important aspect of our business model in the future.”

As the exhibits are being designed—with the help of a team led by New York-based Thinc Design—Sanders said visitors shouldn’t expect an experience that is identical to what is currently in place at MPM’s existing building.

“None of the exhibits as they are at the current museum will just be picked up and moved over (to the new museum),” Sanders said, “But some of the aspects of the current exhibits will be familiar in the future museum …What we are really working through is bringing in new, exciting experiences with a preservation of that nostalgic legacy of the current museum.”

Sanders said that the new building also gives MPM an opportunity to showcase items that have been in storage for many years.

“We have more than 4 million objects and specimens in the current collection and only about 4 to 7% of that is on display (at the current museum space),” she said.

MPM was chartered 1882 and opened to the public in 1884. The county-owned building at 800 W. Wells St. that it has called home since 1963 houses three floors of exhibits ranging from walk-through villages, like the beloved Streets of Old Milwaukee, dinosaur fossils, and life-size dioramas.

The design team for the new building drew their inspiration from a tour of the state, where they collected input from thousands of people from far corners of Wisconsin as well as Milwaukee’s Haymarket neighborhood, where the future museum site is located.

Over the course of seven days, the design team and museum leaders toured 28 cultural and natural sites across the state, visiting Madison, the Driftless region, the Apostle Islands, the North Woods, Door County, and the state’s central “sand counties.”

“We visited a dairy farm, a ginseng farm, Frog Bay National Park, and Aztalan. We also met with different groups across the state. We even made it to a supper club,” Sanders said.

Although the design of the new building was inspired by the variety of what architects saw on their tours of natural spaces, Jarrett Pelletier, associate partner at Ennead Architects in New York City, said Mill Bluff stood out for how it depicted how the state was shaped by water.

“At Mill Bluff we were very much inspired by how those bluffs were shaped by water and created these soft-curve liner forms, and how it revealed certain things that were sort of buried within them. So that sentiment of water was something that we wanted to encapsulate,” Pelletier said.

The current museum is more than twice the size of the new building at roughly 480,000 square-feet, minus the space once occupied by Discovery World, but Sanders stressed that the new structure will be more efficient, while also saving on storage space.

In addition to the objects slated to be stored in the new building in high-density compactible storage, a 50,000-square-foot offsite storage building will house additional collections. MPM is currently using about 120,000 square feet for storage at its existing building. Censky stressed that the museum will not be shedding any of its objects.

“The bulk of our collections at the museum are used for research and are not on display,” she added. “In this new museum all those collections will be (visible from) the exhibit floors so that the visitors can actually view into them; view into labs and really see the breadth of what we have.”

The push for a new museum comes from an estimated $100 million in deferred maintenance at the current space, which has put MPM at risk of losing its accreditation.

With $110 million already dedicated to the creation of the new museum, including $40 million from the state of Wisconsin, $45 million from Milwaukee County, and $25 million in private donations by 72 cornerstone donors, the museum kicked off its Wisconsin Wonders capital campaign on Monday with a goal of raising the remaining $130 million for the project.

“This is a bold project that will have a transformative effect across the state and around the world,” said Jay Williams, former MPM president and campaign co-chair with his wife, Madonna. “With enthusiastic commitment of corporations, foundations and private citizens, and with the significant public investments made by the State of Wisconsin and Milwaukee County, we can create a multi-generational impact.”

Ongoing fundraising efforts will continue until the goal is met, MPM said.

Groundbreaking for the building is slated for late 2023, with Minneapolis-based M.A. Mortenson Co. and Butler-based ALLCON LLC overseeing construction, and the new museum is expected to open in 2026.

The Milwaukee Public Museum’s current home will remain open until the new space is finished.

MPM is operated by Milwaukee Public Museum, Inc., a private, non-profit company, and its facilities and collections are held in trust and supported by Milwaukee County for the benefit of the public.

Also, see a video posted by MPM today on Twitter:

BIG Future Museum announcement!!! Today, we are officially launching our Wisconsin Wonders fundraising campaign, which has already raised $110 million toward a new Museum. What will this new Museum look like? Watch the video to find out!https://t.co/tyOKZI0XGd pic.twitter.com/KglpeI7gKi