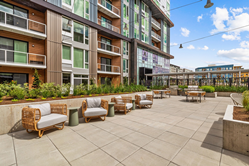 Verde at Esterra Park apartments near Seattle are leasing fast to eco-conscious renters.

“Building to the latest in sustainable design – LEED Zero Carbon – is a big step in itself, but we also thought Verde would attract residents who want to adopt a low carbon lifestyle and put their spending power and daily choices to good use,” said Mike Hubbard, Capstone Partners.

One of the nation’s most sustainably-designed apartment properties tapping the eco-living movement, Verde at Esterra Park began welcoming new residents last month to its first-phase of 345 homes, of which 65 percent have already been leased. Information on leasing and availability are at https://verdeesterrapark.com/.

Located in Redmond adjacent to the Microsoft corporate campus, Verde is betting that a tech-savvy demographic will embrace a sustainable, net-zero lifestyle to reduce their carbon footprint and promote a circular economy.

While sustainably-designed real estate is becoming more common, what’s unusual about Verde is that it is both carbon-neutral by its design, and also focuses heavily on eco-conscious choices and lifestyles by its residents — to extend green-design into green-living.

“Building to the latest in sustainable design, LEED Zero Carbon, is a big step in itself, but we also thought Verde would attract residents who want to adopt a low carbon lifestyle and put their spending power and daily choices to good use,” said Mike Hubbard, Principal of Seattle- and Portland-based Capstone Partners, the development firm for Verde.

“Big corporations like our neighbor, Microsoft, are on the right track in their efforts to address global warming, and consumers want to do their part too. The average Seattleite produces nearly 19 tons of carbon emissions annually, whereas The Paris Agreement target is around 4 tons per person. That means there are significant building performance and lifestyle choices that we can model at Verde to help achieve The Paris Agreement goals,” he said.

The Verde residential community, including a second-phase of 291 apartments, is the last component of the 2.8 million square foot mixed-use Esterra Park development which Capstone Partners first set in motion in 2013. When fully complete, Esterra Park will include 2,600 apartments, 245,000 square feet of office space leased to Microsoft, and a 282-room dual branded aLoft/Elements Westin hotel.

“We want to catalyze sustainability from conception to occupancy,” Hubbard added. “It’s not just about how we change the built environment, it’s about helping facilitate a change in human behavior and consumer demand for a better planet. Multifamily buildings are an ideal platform to push the environmental boundaries because the living environment is where it all comes together.”

A number of aspects are attracting residents to Verde.

Seattle- and Portland-based Capstone Partners’ mission statement sums up its strategy: We build up the neighborhoods where we live, thoughtfully. Capstone executes meaningful multifamily, office, industrial, and retail developments by harnessing complex situations and face-to-face relationships with project partners and communities. Since 2002, Capstone has completed over $2.8 billion in projects and investments across diverse product types across the Pacific Northwest. For more information visit http://www.capstone-partners.com/