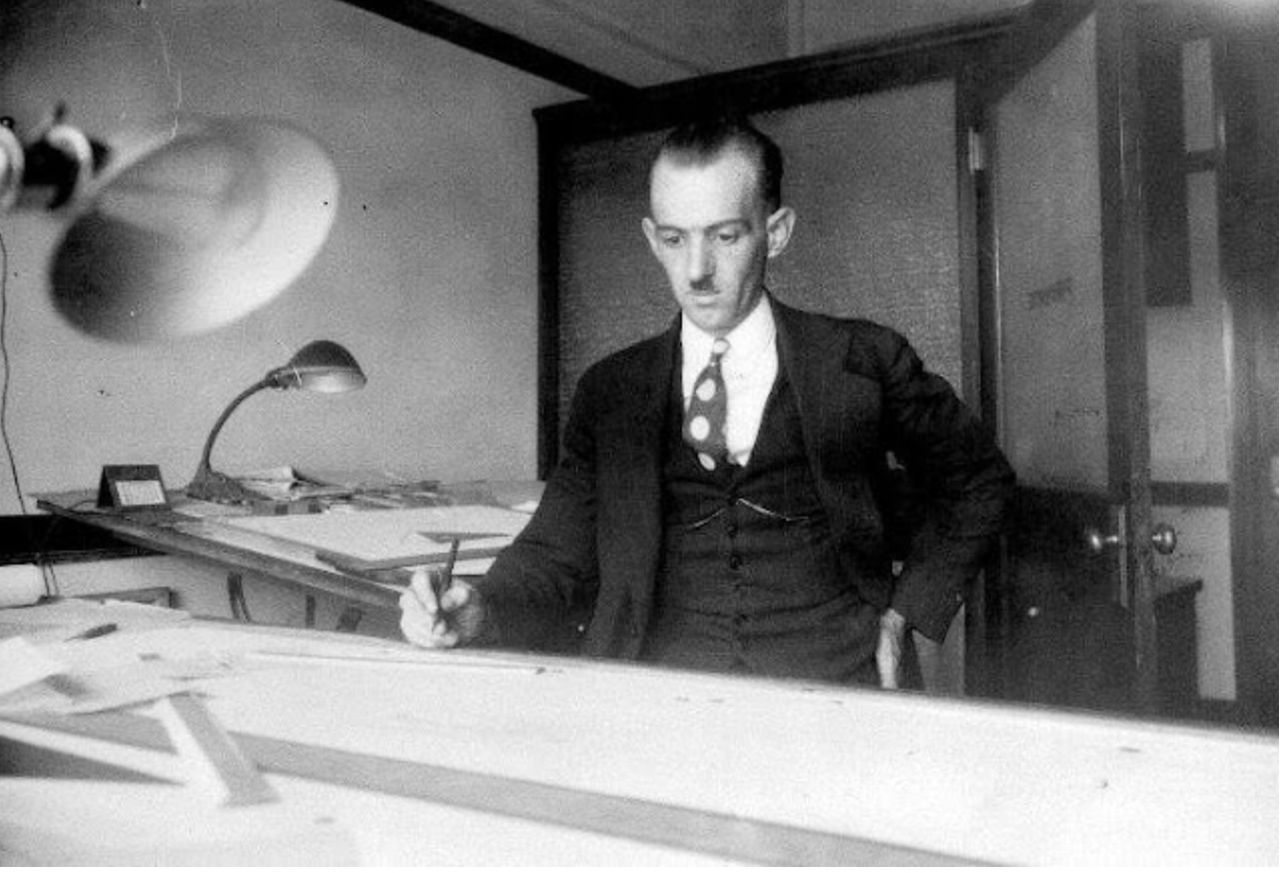 People did drink during Prohibition. Speakeasies and other establishments that sold alcohol when it was illegal in the United States, from January 1920 to December 1933, have been romanticized as landmarks of liberated Roaring Twenties behavior.

The whispered suggestion to speak “easy” (quietly) in public about buying booze was a way to stay out of trouble at home, too.

An English Tudor Revival-style house, built in 1933 in Portland’s Laurelhurst neighborhood, lets you step back in time to the Prohibition era. There’s a speakeasy-style bar and lounge in the basement.

That’s not the only throwback in the three-level house at 3517 E. Burnside St.

The winding staircase is outlined with wrought-iron railings, and dark mahogany details are visible on the floors, walls and ceilings.

The 5,116-square-foot dwelling also comes with a mystery: It was designed by Ewald T. Pape, who drew plans for early 20th-century Portland apartments.

Pape is credited with introducing the upscale, two-story townhouse concept to the city when there was a deep housing shortage between the world wars.

But architectural historians admit they don’t know a lot about Pape’s education or where he was born in 1894 and where he died in 1976. But his relatives know.

Amanda Pape of Texas has been researching Ewald Theodore Pape, who is her first cousin, twice-removed, off and on since 2011.

With her skills as a retired university librarian and archives manager, boosted by a free year’s subscription to GenealogyBank that she won at the Texas State Genealogical Society conference, she searched old newspapers, PastPortland.com and the Oregon Historic Sites database to piece together Ewald’s life.

He was born in Dusseldorf, Westphalia, Germany, and arrived in New York days shy of his 19th birthday in 1913 on the SS Frederick the Great passenger ship. He first resided with relatives in Illinois, where he met his future wife, Alma.

By 1925, Ewald was advertising his services as a designer of custom “character” homes and was soon working for multifamily housing developers.

Designed to look like expensive single-family residences from the outside, each of the apartment units had a kitchen, tiled bathroom and more amenities than found in a room in a boarding house, longterm hotel or bare-bones flat.

In Northwest Portland, early apartments were typically three or four stories high and arranged in an L, H or U shape to allow light and air through windows into each studio or multi-bedroom unit. Front doors were accessed off hallways.

On the east side, where land was less expensive, garden court apartment complexes, with a separate outdoor entrance for each apartment, were popular, according to researchers for the National Register of Historic Place’s Middle Class Apartment Buildings in East Portland report.

The report stated that Ewald Pape’s east-side townhouses were an upgrade of multifamily living, with individual front and back entrances and green spaces. The two-story units had a staircase with wrought-iron railings.

Pape’s most notable townhouse projects still exist. They include:

Amanda Pape wrote in her genealogy blog, ABT UNK, that during World War II, most architects were busy with federal mass-housing projects and raw materials were dedicated to the war effort.

As demand for private residential design services disappeared, Ewald Pape, who was not a registered architect, found work as an estimator for the Portland Door Company. When the war ended, he returned to designing custom homes and developed houses on speculation.

In 1955, Ewald Pape’s name disappeared from the Portland City Directory, but Amanda Pape’s research found a record of him in Southeast Los Angeles County. There, the Downey City Directory has him working as a designer for the Anthony Homes division of the Anthony Brothers Pool Company.

Ewald was retired by 1968 and died in Downey in 1976, at age 81. Alma and Albert also died in California, and since Albert had no children, there are no direct descendants, said Amanda Pape.

Pape was commissioned by Portland contractor Frank A. Read to design the house for sale in Laurelhurst.

When it was completed, the house, which has a steeply pitched roof, was described in an Oregonian article as “an English Tudor theme … with a harmonious blending of stucco, stone, brick, and timber.”

Yet an Oregonian ad placed by Read called it “Colonial, outstanding in appearance, faultless in construction.”

The house for sale, which has a stone-clad entrance and a “party room,” found a buyer in 1933, the last year of Prohibition: Dr. Raymond R. Staub and his wife, Pearl, lived there with their two children through at least January 1951.

If there was a speakeasy bar built into the spec house, it most likely was ignored by Raymond Staub, whose influential father, the Rev. John James Staub, was the minister of Staub Memorial Congregational Church, also known as Community Bible Fellowship and Sunnyside Congregational Church, in Southeast Portland.

But maybe not. Raymond Staub was the chairman of Portland’s board of aeronautics. The bar’s original woodwork and aeronautical theme “commemorate” Staub as the first owner, according to listing agent Leslee Dirk of ERA Freeman & Associates.

The Stanley Spencer Malinsky family owned the home from about 1952 to at least the end of 1968, according to Amanda Pape’s research.

The 89-year-old house’s original exterior and elements were deemed to contribute to the historical integrity of the Laurelhurst Historic District, which was listed on the National Register of Historic Places in 2019.

The enlarged kitchen, with granite counters, connects to the family room and nook area. The primary suite has a dressing room with original built-in cabinets as well as leaded-glass windows that open over the front entry. There are three more bedrooms, another bathroom and a powder room.

The speakeasy, mentioned in Dirk’s marketing materials, is equipped with a black sink and beverage refrigerator.

There is also an oversized garage sharing the 7,405-square-foot lot.

More on the Portland and Oregon real estate market:

• Big house, low price: More bang for your buck by the square footage?

• Off-grid estate near Roseburg is on the auction block at $2.5 million

• Two Pearl District townhouses in former train station are for sale, starting at $1,575,000